Who is the Eurohike Genus 400 for?

Strictly speaking, the Eurohike Genus 400 is a 4-person air tent, and for quick getaways it is probably suitable for four adults on four extra narrow camping beds side-by-side, on two narrow double mattresses, or just simply in sleeping bags. It is however more recommended for camping with kids, but the Eurohike Genus is the most suitable for small families or for a couple looking for a weekend break.

The one big bedroom is just ideal for two people, leaving enough space in the bedroom for personal belongings etc.

Owing to the materials used, the Eurohike Genus 400 is not for the hard-core campers, but it does the job: it keeps rainwater out.

Where to buy the Eurohike Genus 400

The cheapest is GoOutdoors at the moment, but Blacks / Millets / Ultimate Outdoors sell it for effectively the same price. The Eurohike Genus 400 usually can be found on eBay and Amazon too.

The entire tent is 450 cms long and 250 cms wide, which equals to a 11 sqm large footprint. The external height of the tent is 190 cms, which you can enjoy almost everywhere within the tent, except for the back of the bedrooms where the headroom is reduced slightly.

There is one main entrance to the Eurohike Genus 400 at the front. There are two fixed windows, and one bedroom at the back of the tent.

The bedroom is 240 cms wide and 210 cms long, suitable for 4 persons on people, recommended for two.

The Eurohike Genus 400 comes in a 73 x 35 x 28cm carrybag. The pump is included in the bag, which weighs just under 10 kgs without the pump. The are 3 air beams to inflate, the beams inflate separately. If you wanted to save some time, you could invest in an electric pump, such as this one by Kampa that I can fully recommend – you just set the psi and watch the tent inflating.

There is no footprint, and the tent inflates as ‘flysheet first’. This is extremely handy when you need to pitch it when it is raining: the bedroom stays dry.

The bedroom is preattached to the flysheet from the inside and it is a bathtub style bedroom: the bottom of the bedroom is waterproof and sits on the ground. As you inflate the airbeams, the pre-attached bedroom will be fully set-up when you finish pumping, ready to be occupied.

The groundsheet under the living room / porch area is tucked under the flysheet.

The living area itself is 5.5 square metres: it is more than big enough to have two camping chairs and a table inside. The floorplan is quite misleading, in real life there is no separate porch and living room, there is just one living room.

As you enter the tent, the living area in front of you is actually – surprisingly big – 225 cms long and 250 cms wide. The sidewalls are almost vertical, the headroom is 190 cms. It feels spacious, especially if you enter with a preconception like I did.

(I love this lantern because it comes with a remote control – I just put it in one of the pockets inside the bedroom so I can find it easily in the middle of the night. It also has three light modes, the dim setting comes handy in the fight with insects and also, does not wake everyone up straight away like other, super-bright LED lanterns.)

The bedrooms are just big enough for 4 people, however it would be tight on space for 4. Much suitable for a couple: you can easily fit a double mattress and an organiser inside. The bedroom is not darkened, but it has a dark grey fabric. The bedroom door is half mesh, and there is a small ventillation gap at the back of the tent.

Because there is only one door and the large PVC windows cannot be opened, the Eurohike Genus 400 can get really warm inside in the summer. On the other hand, thanks to the light-grey flysheet, it feels bright and less depressing than other tents with the dark indigo blue fabric.

The Eurohike Genus 400 has a polyester flysheets with a waterproof coating. The magic number is 3000mm HH which is short for Hydrostatic Head – it is enough to know that it is waterproof. What you also need to be aware of, is that this coating can break down under UV light; basically sunlight. So with time it may lose it’s water-proof properties.

If you’d like to find out more: Tent materials, fabrics, specifications and all the acronyms. FAQ.

The fabric itself is thin and lightweight – it is easy to carry, but it may not be as durable as you’d like it to be.

Quite a few previous generation Genus 400 was seen with ripped flysheet, but the repair kit comes with the Eurohike Genus 400 so it is not that big a deal – not for this money…

Polyester is the most commonly used material for flysheet thanks to the fact that it is lightweight and waterproof, plus it is quick to dry (so it’s less likely you need to pack it away while it’s still wet – and have a mouldy tent that stinks in a few months…).

On the other hand, polyester does not have great thermal properties: it won’t keep you cool when it’s hot outside and and won’t keep you warm when it’s cold outside. This also makes polyester prone to condensation building up on the inside of the flysheet, which can soak the bedrooms walls quickly even if it has not rained.

If you plan to camp in cooler weather, this Kampa camping heater is more than recommended to fight cold and condensation.

Having a loose groundsheet, the Eurohike Genus 400 may have better air circulation inside which may help prevent the build-up of condensation, but it would not eliminate it entirely.

Speaking of the loose groundsheet: if you pitched the tent carefully it is unlikely that water would come through there. There are small gaps though, where insects may come in, so it is essential to get a decent bug zapper, insect repellent lamp or other means of keeping the bugs out.

There are good reports on the wind-stability of the Eurohike Genus 400; however, there are always a lot of other factors that can affect the stability of the tent in high winds, not just the tent itself. The airbeams are robust yet flexible, and the Genus 400 does not have big flat surfaces where wind-drag could become an issue.

As long as you try to position it with its back or sides towards the wind-direction, it should be fine. As there is one door only, at the front, be very careful in windy weather when opening it.

More about air tents in wind: Air Tents in Wind

What makes the Eurohike Genus 400 very attractive (beside its price tag) is the fact that you can but a canopy that fits over the front door. It basically extends the tent by 2 metres adding a sheltered porch area, that provides protection for the front door when it rains. Needless to mention how great it is when it does not rain.

Pros: cheap, bigger than it looks, no fuss, easy pitching, light-weight, does what’s on the tin

There is a ‘Black-out’ version of the Quechua Air Seconds 4.1, called ‘Fresh & Black’ which is only £80 more expensive, still well below £300. The only problem with that is: why would you buy a 4-person air tent for that money, if you can but an 8-person Eurohike?

I reviewed the previous generation Genus 800 in this post and later updated it to the current model: Airgo Air Genus 800 Review

Could also be interesting: Eurohike Genus 800 vs other 8-person large family air tents 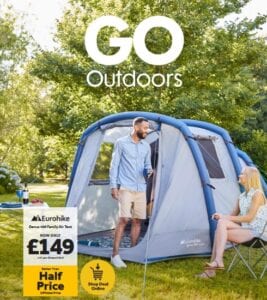 We Care About Your Privacy
Affiliate Disclosure
About 10TS Tents