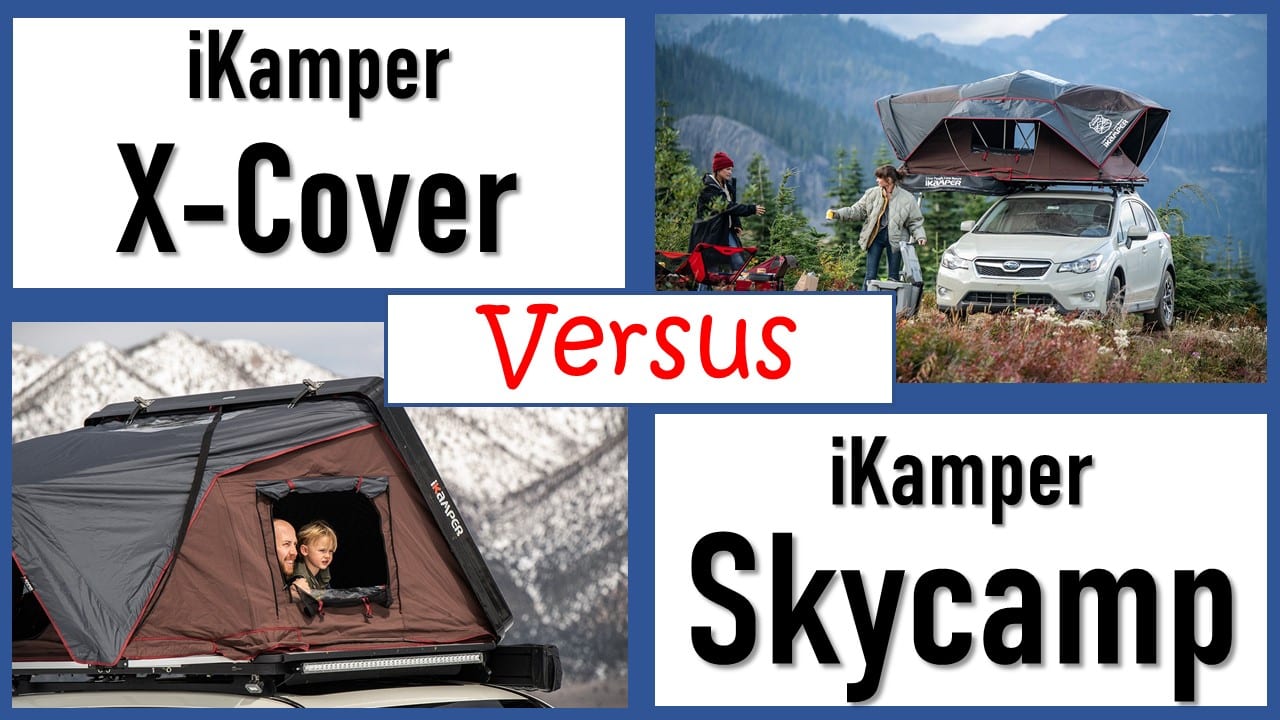 iKamper has introduced X-Cover, a soft-shell roof tent with inventive design and some unique features that are unseen on other roof tents, other than…well other iKamper RTTs. If you like the design of the iKampers, and you already know that you are going to get one of these, it’s a pretty tough decision between the iKamper X-Cover and the Skycamp 2.0

The X-Cover won Overland Journal’s coveted Editor’s Choice Award in 2019, and was also a finalist in Outdoor Retailer’s Innovation Awards. Also in 2019, the X-Cover won the Red Dot Design Award. The iKamper X-Cover is the newer model, and inherited pretty much everything that the Skycamp 2.0 had already had.

So in this comparison between the X-Cover v Skycamp I’ll focus on the differences, similarities and ultimately, trying to answer the question: is the X-Cover better than the Skycamp? And if so, why?

Also, X-Cover in comparison to other cargo roof top tents here: Roof Tent With Kayak On Top? Not A Problem!

Who Are The iKamper X-Cover and Skycamp For?

I am blown away by the design of the iKamper X-Cover. But honestly, I don’t know why. Maybe, iKamper’s marketing works, because it’s not as innovative as iKamper would like it to be. Yes, you don’t need an extra PVC cover on top of it when you pack it away, so as with every iKamper roof top tent, the X-Cover brought some of the benefits of a hard-shell roof top tent across. Which is great, but there are many hybrid roof tents who has done something similar…so is it just an overhype?

So the success and popularity of the iKamper roof tents probably root from finding the right balance of the features that normally, you can only find on one type of roof tent or the other.  iKamper very smartly amalgamated those in not just one, but 4 products now, and they all bring the most benefits of both worlds (if you like) to the target audience.

Who Are The iKamper X-Cover and Skycamp For?

The target audience: couples, small families with 1-2 kids / dogs who’d like to experience overlanding without the ‘ruggedness’ of it. People who are looking for a pleasant stay for the family over the weekend, to have a great time and who may want to come back the next weekend.

So in many aspects, the iKampers are ‘softer’ than other roof top tents, and they are definitely not the ones that you would strap on top of the Toyota Land Cruiser and head out to an expedition in the Namibian desert for a month…

iKamper is a small, family-owned company from South Korea. It was founded in 2012 by Soon Park, who lived in the States between 2008 and 2012. During these years he and his family spent almost 2 years on the road camping and exploring. When they finally returned to South Korea Soon founded iKamper.

After the moderate success of their first product he launched a Kickstarter campaign for Skycamper in 2017. This became a huge crowdfunding success and raised $2.37 million in 45 days.

The iKamper X-Cover’s design eliminates the bulky PVC cover of traditional soft-shell roof top tents, the cover is the skin of the tent itself. It saves some time getting the cover off, and looks better than the heavy duty tarps of other models but the X-Cover is not just a pretty face.

What is quite apparent, that the X-Cover folds out into a dome-shape, while the Skycamp has more resemblance to the clamshell type roof top tents, with a big plus.

In terms of external size, the X-Cover is smaller when packed up, and slightly bigger when folded out.

While the Skycamper external width increases near the shoulders, where the hard-shell cover is attached to the base, the X-Cover remains 190cms wide for its entire length. When packed away, the X-Cover is slightly shorter: the 190cms width doesn’t change, while the Skycamp uses the 218cm long shell as the cover.

The internal height is the same 115cms, however, the highest point in the X-Cover is at the center of the tent; while the Skycamp is slightly asymmetric.

The X-Cover has an average profile height (36cms); however it’s only true if we compare the X-Cover to other soft shell tents. It can’t beat the 32 cms streamlined profile of the Skycamp, but to be honest it would not make much of a difference when driving.

As mentioned, both have a 190cms internal width, however the X-Cover is slightly bigger inside: 4.37 sqm versus 3.99 sqm of the Skycamp. The difference is minimal, and a bit misleading: the X-Cover has a 227 x 175 cm mattress, versus the full 190cm wide mattress of the Skycamp.

It’s only a small difference, but if the Skycamp was a 2+2 family tent, 2 adults and 2 kids would really suffer in the X-Cover: less than 45cms per capita is very slim.

The mattress is made of  a 1.8″, high density memory foam in the Skycamp. The X-Cover has a much thicker, 2.5″ hdf mattress. Despite that, it is mentioned more than once in user reviews that the mattress in the X-Cover is not thick enough, and where the hinges are, it can’t prevent the hinges from pushing against your hip. So you might need a mattress topper…

In terms of how you feel inside: thanks to its clever mechanism and smart design, there’s not just plenty of space, but there’s plenty of light inside the X-Cover too.

The Skyview window was a great feature on the Skycamp, and it is even better on the X-Cover: instead of one roof window, you have 2 of them! There’s plenty of light, plenty of stargazing, and a much lighter feel inside the tent.

Pockets have always been an issue with the Skycamps (the lack thereof…), fortunately the X-Cover has some stowaway under the windows.

The X-Cover is undeniably lightweight, measuring only 55 kgs vs the 73 kgs of the Skycamp. It makes a big difference if fitting on top of your car (much easier to fit the X-Cover) and it comes really handy when you have a smaller car with only 75kgs dynamic roof load capacity, and the crossbars weigh 5kgs…

The Skycamp comes with stainless steel hardshell locks to keep your RTT secure, and you also have the option to upgrade them later.

Pitching time is around 60 sec for the Skycamp, folding it takes a bit longer (90 secs). The X Cover from this respect has a bit of a disadvantage with its 3-minute pitching time, but it’s not bad either.

The only thing that is worth bearing in mind that if you carry stuff on top of the X Cover, you’ll need to remove those first. (There are some cargo-style roof tents that can be opened while the load remains on top – see more about cargo roof top tents here)

Both use the same 300gsm breathable, water-resistant poly-cotton canvas as the tent fabric, and they have the same waterproof zippers. Sadly, they both have a polyester flysheet for extra protection from rain. The flysheet is made of a 150D polyester fabric with water-proof coating, it has 3000mm HH (Hydrostatic Head) rating.

(if you are not sure about what those numbers mean, this F.A.Q is just for you: Tent materials, fabrics, specifications and all the acronyms. FAQ.)

To be completely honest I don’t really see the point of having a polyester flysheet on top of a polycotton tent, for two reasons:

Although it would keep the rainwater out, easily, in colder mornings condensation will probably build up between the tent wall and the flysheet. It also eliminates the benefit of having a polycotton tent – polycotton fabric is breathable (condensation will much less likely  build up inside), while polyester is not.

No wonder, that iKamper has a dedicated section in their F.A.Q. for ‘is condensation normal?‘, explaining that it is. Well, not so much for a polycotton tent, but if you cover it with non-breathable polyester…

Also, if you don’t make sure that you regularly remove the flysheet and dry it out properly, you can expect that funny smell of mold appearing in no time, and then there’s no way you will remove that greenish coloring from within the fibres of the canvas.

The wind resistance of both roof-tents is 40 mph (standing), and 70 mph (transport). This is not outstanding, but if I refer back to ‘who is the target audience’, then the nice family break would probably come to an end well before the wind-speeds reach a constant 40 mph (Gale Force winds)

The X-Cover is a great all-rounder with a lot of accessories such as awning, shoe rack, outer storage, vinyl canopy, wind deflector, movie stand or upgraded mounting brackets. The only accessory that is unavailable for the X-Cover, but you can buy it for the Skycamp is the Annex.

Even the inner insulation tent is available for both, giving you the option of turning them into proper 4 season tents. The extra layer of insulation adds a cozy feeling helps keeping you warmer by blocking drafts of air, and better retaining body heat.

I did not mention the crossbars: although the crossbars are integral part of the X-Cover, you can actually remove them (ask iKamper to remove them). It makes the X Cover $400 cheaper as well…

In terms of price, the Skycamp is more expensive, and not just slightly…

The difference in price is even more significant in the UK, where the difference between the base price – Skycamp vs X-Cover with crossbars – is £750: the X-Cover costs £2,750 while the Skycamp starts from £3,500. On todays rate, that’s $966 difference, so the X-Cover is “cheaper” in the UK (or the Skycamp is more expensive…)

Considering the value for money, the X-Cover is a clear winner for me. It’s almost as large as the Skycamp, making it ideal for weekenders, families, friends, and can cater all needs with the plenty of accessories available.

The Skycamp on the other hand cannot really justify why it’s much more expensive. I am not convinced at all, that a hard-shell cover, a streamlined profile & a 15cm wider mattress (but much thinner) are worth that minimum of $700 difference, unless you insist on having (the option for) an Annex.

For much less money, the X-Cover you brings you a really lightweight roof tent with an extra sky-view window, thicker mattress and longer sleeping area; plus 30kg cargo capacity on top where you can carry kayaks, paddleboards, surf-boards, bicycles, another roofbox etc.

It’s really a no-brainer for me.