A friend of mine asked me, which roof top tent he should buy for him and his wife that would fit on his SUV. He has a 2010 Mitsubishi Outlander with factory fitted roof rails and he has got a pair of Thule Evo Wingbar crossbars. Unfortunately, there is not such thing as an SUV Roof Top Tent but most rooftents are designed for larger vehicles. So why did he struggle to pick one? 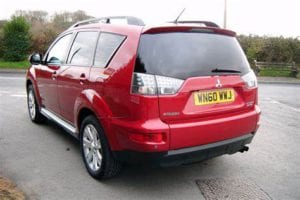 I asked him what did he fancy, and he was really fond of the James Baroud Evasion series hard-shell roof tents. Despite the fact that it would have definitely looked awesome on top of his Outlander, he was not sure how comfortably he could get in and out of the tent as he would want to climb in from the rear of his SUV. He would also love an annex that connects organically to the roof top tent so he would have a little extra room to change clothes etc.

I started to grasp why he was struggling: he knew that the rooftent he desired would not suit him.

So it gave me the idea to share what our thought process was, and tell you which one he picked in the end.

How To Buy A Roof Top Tent for an SUV?

His Thule system had a 60inch / 150 cm length. This is the whole length of the crossbars and in this case, the useful space as well. On other models the brackets may reduce the useful space on the crossbars. As he wanted rear access, the rooftent should not be wider than this – or if we turn it sideways, it should not be longer than this when folded.

For this type of roof bars, the minimum distance between the two should be at least 60 cms. The way he fitted them they are more than a metre apart.

It can seriously restrict access if the ladder for the tent is not long enough. So we had to double check how long the ladder is, and if there was any extension available to buy. My friend was (is) quite serious about safety (that’s his profession) so he wanted to have a ladder that’s long enough to maintain the 4:1 ratio when set up, as this is the safest angle for climbing a ladder.

Fair play to him, he had fallen off a ladder once or twice to know what’s safe…

Not a major issue, but given that the whole vehicle was quite high already, he would have liked something on the slimmer side of the rooftent market. He often goes to the Isle of Wight and to France, so he would have preferred to stay under 2 metres with the rooftent on top. Again, not a priority, the category one up on the RedFunnel was only a few £s more expensive and we would definitely stay under 2.6 metres for Brittany Ferries.

A slimmer pack would also be quieter on the road and did not limit (further) the (not too extended) off-road capacity of his Outlander.

My friend wanted access to the tent from the rear of the car, and to be honest this had proven to be the most difficult challenge. He did not say what type of roof tent he put on his SUV but he imagined – but based on the fact that he liked the James Baroud tents I suspected that he had hard-shell tent in mind. I told him that he should be prepared to make compromises otherwise he would lose out on the bigger chunk of the market, but I tried to find him a hard-shell rooftent with a rear access and annex anyways.

He was lucky with his Outlander, since it does not have a long ‘tail-wing’ on the back of the car. Plus, the window of the boot-door can be opened separately. Plus-plus, the roofbars end pretty close to the edge of the roof. On other SUVs and cars there may be half a metre distance where the roofbars end and where the actual roof ends…

I guessed that he would have preferred some space inside the tent: firstly because he is quite a big fella. Secondly, he was a seasoned camper but he never tried overlanding before and I guessed he was not prepared to give up on the space his 3-person tent provided, or not much. So in my head I discounted everything that did not have at least a 135 cm wide sleeping area. Which pretty much put the emphasis on soft-shell roof tents and bigger hard-shell roof tents.

So these are the roof top tents I wanted him to consider, tell me what he liked and what he did not, and I would direct my search based on his preferences.

Just wide enough for the pair of them (53” / 135 cm) and it has access from all four sides. The ladder is fully extendable up to 220 cms. The Eagle has great specs and it is one of my favourites among the hard-shell roof tents but there were a few issues:

My friend had read both of my reviews of the Eagle (here and here), and was not against it but however great a rooftent the Roofnest Eagle is, it was not for him this time.

I showed him the 3rd Generation Alu-cab Hard-shell roof tent. I can’t say he LOVED the design – the boxy shape looks organic on a Defender 110 but it is not that jaw-dropping on a curvy Outlander. He did not say NO straight away though:

But, on the down-side, and the reasons he did not pick this one are that;

So, we paddled towards soft-shell roof tents. If we turn them sideways they could make a great solution.

I told him that the FeatherLite is one of the best kept secrets of the soft-shell market.

He LOVED it, and did not mind the colour at all! I saw him imagine themselves with the FeatherLite. He did say that it could be a bit wider, and he did ask why was the ladder outside the annex… So it was not perfect but ticked most of the boxes. I thought I give him a few more alternatives though…

If I said that the FrontRunner FeatherLite ticked most of the boxes, then the Ventura Deluxe 1.4 ticked one more: its 140cms wide. Apart from the size, almost everything else is the same, or similar;

But when I showed him the ARB Simpson 3, came the A-HA moment: you access through the floor, so when you put the Annex on it hides the entrance and the ladder. He did not know that he wanted exactly this. 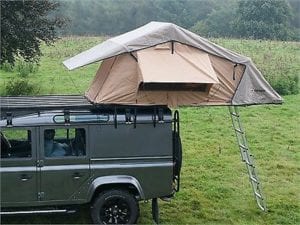 It was perfect in every way for him and his wife. Had the private access in the back and plenty of space inside. But then came another one, to punch him in the face…

This was the last one I showed him. It is roughly the same price as the Arb Simpson 3 (I have found this on eBay), but the TT02 is much bigger: the whole length of the tent, when open, is 3.2 metres; and the mattress alone is 240 cm long. At the same time, the packed dimensions are smaller: only 125 by 140 cm. I don’t know how Tuff-Trek did it, but anyhoo…

Besides being HUGE the TT02 has really great specs too. It did not take too much convincing, but these specs are really convincing…

I am not going to tell you a big secret when I say, that he picked the Tuff-Trek TT02. It did not only tick all the boxes, but it also came with 12 months warranty. Last, but not least it was in stock, ready to be dispatched within 2 working days… 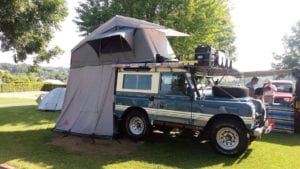 So It was really a no brainer, he chose the Limited Edition grey tent. I am sure it looks great on his red Outlander! Now they are off to the Highlands for a few weeks but when they come back I am hoping to catch him for a quick chat about the TT02. And Scotland…

I can totally understand his choice, however the ARB Simpson 3 would have been great for them too…

Which one would YOU have chosen? What else could I have suggested? Let me know in the comments!

We Care About Your Privacy
Affiliate Disclosure
About 10TS Tents

Sharing is caring...Please spread the word :)